Third edition of the singlestick charity tournament was a big succes.

This year was the third time we organized our annual Singlestick Charity Tournament. Each year it seems to be a bigger success and we are very happy to announce that we made €1200,-!!! With 60 fighters we reached our cap and with another 15 volunteers the whole event was awesome. The amount we raised was actually €1198.50 but Cem Ates came running with an extra €1.50 to round up the total. This is a perfect example of the atmosphere of the event.

Our own instructor Matthys Kool won the tournament and decided that the Ronald McDonald House in Leiden would receive the total amount. He also received the new prototype light glove sponsored by St Mark – Fencing Clothes & Equipment.

The 4 finalists with the causes they were fighting for: 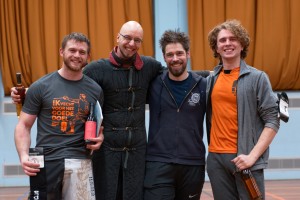 Overall the event was a big success, in the morning people were sparring with a big variety of weapons. Spears, Dussacks, Singlesticks, Longswords, Sabres, Messers and even tubesocks with a ball in it. We started right on time and stayed on schedule thanks to HEMA CM who sponsored our event with their software. During the event we had two fighters who had to drop out but luckily we could easily change fighters in the system.

Here are just a few pictures to get started, taken by Rainer Keizer, more will come as soon as possible!

Here is what Matthys wrote about his experience since this was the first time he fought in the charity tournament even though it’s the third time the HVN organized it. 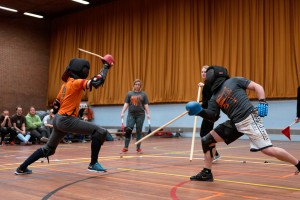 “As a general rule, I don’t fight in the tournaments that I organize. for two reasons. The first is simple, I want to be able to do things as tournament manager. Fixing issues, helping with problems and making sure everything runs as smooth as possible. On the other hand, it feels a bit strange to organize a tournament, get some nice sponsored prizes and than take home those prizes. I had a pretty good chance of winning, I absolutely had to work for it and both Nick, Henric and Daniel gave me great fights, but I was confidend I would place high when entering.

I made an exception this year because I felt like I had an extra good reason to join. The charity I choose, The Ronald Mcdonald Huis Leiden, has a reason. Without going into details, two very dear friends of mine are in a situation where they have to use the service provided by the RmcD house and I see how much it is helping them. I wanted to do as much as I can for them and breaking my own rule was the right thing to do.

We raised the massive amount of €1200,-! I’m so proud of the whole event and especially the HVN members. I saw great fights, the atmosphere was great, people were happy and overall it was an enormous success!”